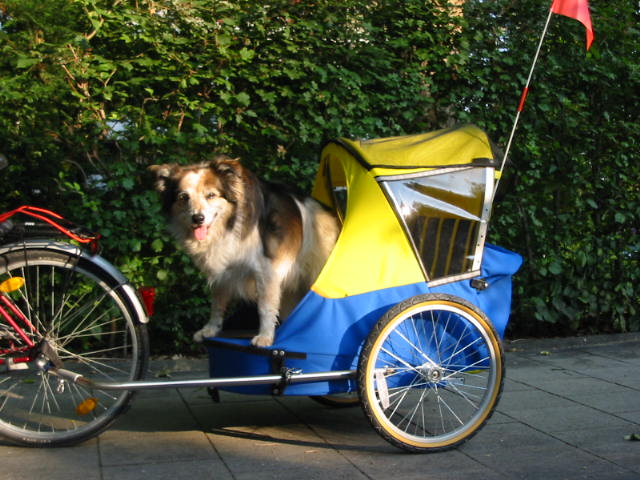 Indulge me. Yesterday my dog did something that reminded me what a great character he is.

Munich is a cyclist’s paradise, and as you can see from the picture Jake (my dog) and I have been taking full advantage of the hundreds of kilometres of bike trails through the city. In the city, the trails are 5-6 foot wide asphalt paths between the road and the sidewalk. On the busier paths, like Ludwigstrasse around the university, it’s a veritable two-wheeled autobahn; dozens and dozens of cyclists, some hugging the inside (the “slow” lane) and others whizzing by at light speed. Woe to unsuspecting tourists who fail to stay clear of the bike paths… they take their lives in their hands almost to the same extent as wandering around on the road.

At one point in front of the university, Ludwigstrasse continues north but there’s a crossing to the other side of the road. It’s not like crossing a street…you’re just riding along and suddenly there are bicycles stopped sideways in front of you, waiting for the light to turn so they can cross. I missed the little stoplight placed specially for bikes, and found myself screeching to a halt to avoid a 20 vehicle pile-up.

My poor little passenger in the back, who is usually pretty adept at holding on, didn’t stand a chance this time. I looked back, and there he was, partly in but most falling out of the front of the cart. His hips, which don’t work as well as they should (he’s 13 years old, after all), were still caught inside the cart, until he slithered down into a heap on the sidewalk, between the cart and the rear wheel of the bicycle.

Uh, oh, I thought. That must have hurt. And scared the *crap* out of him, I bet.

Concerned, I made sympathetic noises, and helped him get to his feet. By this time all bicycles had disappeared, and it was just him and me on the sidewalk. He wobbled a bit, then gave himself a shake. He looked at me, I looked at him, then he stuck his head in the back of the cart and grabbed his pink floppy frisbee. He backed away and shook it like a dead rat, and then leaped right back into the cart. With the frisbee hanging out of his mouth and his cloudy old eyes full of challenge, he gave me a big doggie grin — as if to say, “Hey, let’s get going!! what’s the hold up???”.

Inspiring, that. After 13 years, he still surprises me.

One thought on “That’s the spirit”