Growing season is in full swing and it’s hard to sit indoors in front of computer when I could be outdoors playing in the dirt. So goes my rationale for the long delay in posting. 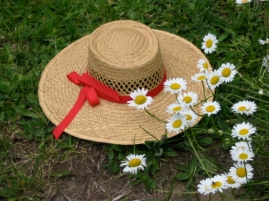 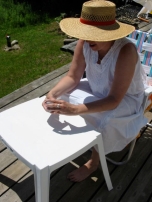 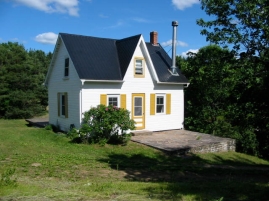 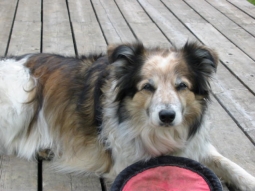 I spent two glorious weeks at a cottage on 35 acres just outside of Minden, Ontario (just south of Algonquin Park). No TV, no radio, no computer — but what it lacked in technology it more than made up for with perks that were good for my soul: Privacy, silence, a working woodstove, cool nights and hot days, fireflies, stars, the smell of fresh-cut hay, a happy dog splashing after his frisbee in the pond, bullfrogs, friendly neighbours, bold hummingbirds, good company, and lazy afternoons watching clouds drift by. And bugs. Teeth with wings, actually. More than once poor Jake returned dripping from the pond with a frisbee hanging out of his mouth and his muzzle covered in deerflies and blood. Thanks to Jake’s frozen border collie crouch, he became known to bloodsucking creatures as “fast food on four legs”. When the bugs needed more of a challenge, they came after me. The little tubes of “AfterBite” were woefully inadequate to head off the evening itchfests. Something along the size of a roll-on antiperspirant would have been better suited for the task.

I spent my days reading, one of them The Story of Gardening by famed British garden expert Penelope Hobhouse. Written in a plummy and haughty upper class voice, it was tough going, but enough to eventually drive me out of my comfortable chair to do some guerrilla gardening of my own. No self-respecting gardener can sit for very long reading about something they’d much rather be doing. So, I dug up some iris’ from around the edge of a huge patch of bulbs in the lawn (survivors of some long-abandoned garden, no doubt), and replanted them in a small bed along the side of the house. Then I edged the bed, and and managed to liberate a patchwork stone border from the encroaching grass. A hot day in July is of course not the best time to transplant perennials, but Gary the lawn mower guy would have sliced them off to oblivion anyway. Mother Nature co-operated with a good solid rain shower later that night. I was too late to rescue some blooming peonies from our friendly neighbour Ian the farmer and his tractor on the day the hay was cut. 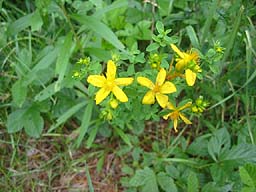 Wildflowers were just coming into their peak during my stay, and I was sorely tempted to collect the buds of St. John’s Wort to make into a tincture. Tinctures are simple to make, requiring no more than a sterilized baby food jar, some vodka, plant material, and time. I hesitated only because I was extraordinarly lazy, and couldn’t rouse myself to find a suitable bottle – neither empty, nor full of vodka.

I learned about healing herbs several years ago through a series of workshops with Heather Bakazias of the Northern Light Centre in Singhampton, Ontario (near Collingwood). After learning from Heather how to identify and use healing herbs, I had a near-religious conversion over ordinary weeds, seeing them in an entirely new light. As a matter of fact, before taking my first workshop I had been toying with the idea of sneaking into my neighbour’s yard and yanking out a weed that was growing on their side of the fence. I’m sure they thought I was insane when I returned home from a workshop and prattled on excitedly about this weed and how it was St. John’s Wort and how much tinctures cost and how you could make it yourself and for heaven’s sake don’t pull that it’s not a weed!!!!

Anyway, I was delighted when I turned on the TV one night recently to see Heather sharing her wisdom, knowledge and warmth on an episode of “Recreating Eden” on Home and Garden Television. She is a magnificent lady and her gardens definitely meet my criteria for heaven on earth.