Here’s a closer look at some of my jungle:

Red morning glories screen the roof of the revue theatre next door, and stop the wind from blasting across the deck.

Along the south-east corner of the deck, a nice crop of jalapeno peppers, red peppers and eggplant (not shown), and a bright mixture of nasturtiums. They’re doing extremely well, dying back when the weather get hot, and then perking right back up again when it turns cool.

Speaking of peppers, my neighbour gave me two “Scotch Bonnet” hot peppers plants. His mother brought them over for him from Trinidad, but he thought I could give them a much better home than he could.  After an iffy start (I didn’t plant them immediately and they spent a day exposed to the hot sun in a little plastic bag) they now seem to be established in their new home. My neighbour tells me that Scotch Bonnet peppers are about as hot as peppers can get. 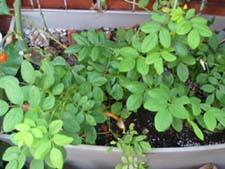 The old rose seedling that I collected from that old pioneer graveyard in Burlington has done very well this year, lots of new growth and no sign of disease. No sign of flowers either, but it’s still a young’un. I’m fretting a bit over what to do with this rose over the winter, because I don’t think it will survive in the container — the roots will freeze solid. I may ask my friend Deb if I can plant it in her backyard this fall, and dig it back up again in the spring.

My Staghorn Fern has loved it’s summer holiday outdoors, and has rewarded me with lots of new growth. It has more than doubled in size over the last couple of months. The fairies are dressed up, I figure the tiara and magic wand look better on her than on me. The racoon likes to knock the magic wand out of the Queen Fairy’s hand almost every night, and the fairies STILL haven’t turned him into a toad. There are two little plants sitting in the water, both gifts from my friends Atilla and Anne. I can’t remember what they’re called (some kind of plant-of-the-year some time back, according to my friends), but after a visit to a nursery I learned that they are bog plants, so I wrapped their roots and a bit of soil in an old nylon stocking and stuck them in. They are much happier now.

Finally, a picture of the racoon fortifications around my orchid stand. I wrapped what’s left of the tattered cover over top of the chicken wire each night. I have the satisfaction of knowing that I am finally frustrating the old fatso, because each morning there’s a big dent in the top of the chicken wire where he’s tried in vain to break through.