Several years ago, while living and working in Munich, I discovered that such a thing as a “Garden Museum” existed in the City of London. Naturally, I took the first opportunity to visit during a business trip to that great city.

The Garden Museum is housed in the ancient church of St. Mary-at-Lambeth in a historically tawdry area of east London called Lambeth/Southwark. Back in the 16th century this area was fertile ground for wealthy manors, gardens, and great plantsmen but by the mid-18th century it was a lawless borough known more for bear-baiting, prostitution, alehouses and bowling alleys than for horticulture and wealthy retreats.

The Church of St. Mary-at-Lambeth was bombed in WWII and a dilapidated tear-down by the mid-1970’s. A determined group of influential horticulturalists intervened and turned it into the world’s first museum dedicated to gardening.

Back in the 17th century this had been the parish church of famous historical plant hunters, the Tradescants, and they are buried in the churchyard. The Tradescants were plantsmen and explorers who introduced to cultivation many of the plants we now grow in our gardens; they also created the world’s first purpose-built museum. The churchyard also contains the graves of Captain Bligh of The Bounty, Anne Boleyn’s mother, and other characters famous but less noteworthy… to a gardener.

So what does this have to do with me and synchronicity?

The “small thing” is a clay tile, a souvenir I purchased at the museum. The first thing I did four years ago when I started the garden was to hang this tile up at the entrance to a makeshift pergola. The quote, “Change this garden then for paradise“, appealed to me. Those words are inscribed on John Tradescant’s gravestone.

Fast-forward a couple of years, when my elderly Dad anointed me keeper of his genealogical research. To make a long story shorter, I discovered that my 2nd great-grand parents were married at St. Mary-at-Lambeth in 1853. I uncovered skeletons and a tragic, sordid story that I’m sure no one has known about for over 100 years. It reminded me that I’m alive today because some very hardy ancestors were survivors. 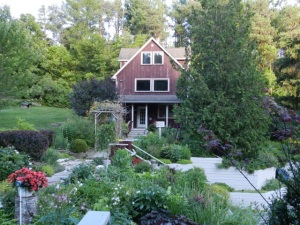 But seriously – what an odd coincidence. And in just over a month I really am going to change this garden for the paradise that is my new home.