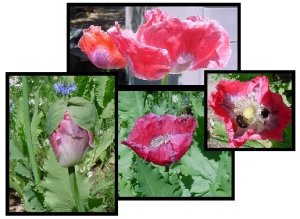 Whoops. A flower grower in California was raided and busted for growing those kind of poppy plants. 19,000 opium poppy plants were seized.

“Daniel Campos swears he didn’t know that the poppy strain he was growing was illegal, the kind which contains the raw ingredient for opium, morphine and heroin. He was selling them as cut and dried flowers only, he said. They were one of the dozens of types of flowers he grows in San Martin and Watsonville.”

Fortunately for him, the DEA believes him and has decided not to press charges.

Got any in your backyard? I wouldn’t know either. There are apparently about 120 poppy varieties, and only one is illegal. It is papaver somniferum.

Poppies.org ( The Continuing Adventures of the World’s Most Controversial Flower”) says that “Papaver Somniferum seeds are a legal product in almost all countries, although it may not be legal to actually plant the seeds in your area.”

You know, they look an awful lot like the poppies I used to have in my garden…

I’ll leave with this rather provocative but very interesting article: Narcophobia and the Opium Myth

“The British government – and others including Canada and several US states – are re-evaluating their narcophobic views which took root a century and a half ago in China and led to the Opium Wars.”

“As modern medicine developed, the new European medical associations sought moral authority and legal power by transforming opium from a European and Asian folk remedy into a controlled substance.

At the same time, narcophobia became an effective scapegoat for China’s rulers. Opium was both the enemy within – morally depraved and physically weak addicts – and the enemy outside – conniving foreign powers bent on enslaving the country.”

The article goes on to state: “Opium’s impact on health has been dramatised. Medical evidence points to only one effect – mild constipation.”