Hot and sunny weekend days in Vancouver are not the time to be wandering around…every one of the 2 million people who live here, plus the 2 million who have come to visit, are out on the street, on the beach, and in their cars. All desperate for a quiet spot to commune with nature and gaze dully at the spectacular scenery. I am no exception, except that unlike many visitors, I know HOW to escape the crowds within city limits. 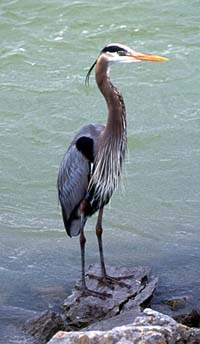 I went to a museum. I wandered through the trails of Pacific Spirit Regional Park. I sat on a quiet spot on a log just inside the boundary of Wreck Beach, nodding hello to the sunworshippers passing by on their way to the nudie section. I sat for a long time and watched a group of 13 Great Blue Herons feed at the edge of the incoming tide, until a dog chased them, followed them down the beach until they gracefully landed, and chased them again. A woman waved her arms and whistled, to which the dog responded with the classic canine version of the middle finger — it kept running.

Later, I passed this same woman on the path. She gave me a vapid smile and a hello, and I was almost past her when the impulse hit me to stop and have a word.

“I saw your dog chase those herons. It was very upsetting.”
“Oh”, she replied in a plummy Jane Goodall british accent, “the problem really is that it’s a off-leash area, yew know, wot wot”.

I was less than impressed with that response.

“No actually, the problem is owners who don’t control their dogs and allow them to chase the wildlife. I was very angry that you allowed your dog to do that.”

It was like bouncing a ball off a hard wall. She blithely carried on in a manner that indicated she had been watching too many nature shows on TV, and thought she actually knew what she was talking about. “The herons are preparing for their 7 o’clock feeding and they will return at the next tide to…” blah blah blah. “They are accustomed to the dogs on the beach….” blah blah blah, topping it off with an inane “law of the wild and all that, yew know, wot wot”.

“Madam”, I replied to this idiotic lecture, “there is more than enough pressure on wildlife without your generous assistance. If you are going to let your dog off-leash, then it is your responsibility to ensure that your dog is under control at all times, and THAT means, the dog comes when he’s called the first time ’round.” 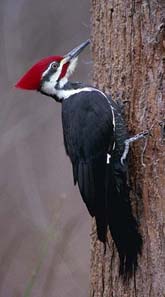 She just looked at me with stupified smile on her face, one normal resevered for imbeciles and born-again Christians. I turned and continued walking, fuming at yet another stupid dog owner, the kind that ruins a good thing for everyone else.

I fumed for a while longer. A few of the herons came back to feed, until they were disturbed by someone wading in the water toward them. Point taken. Human stupidity is not the sole domain of dog owners.

In spite of this, I enjoyed my walk through this giant forest in the middle of the city. It’s bigger and better than Stanley Park, and few tourists even know about it. One of the highlights was coming across a beautiful pileated woodpecker. He was on the ground, and jumped to a nearby tree about 10 feet away as I passed. I got a good, long, close-up look at this handsome fellow.