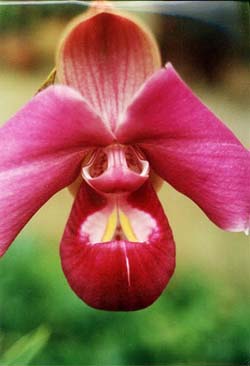 This is the flower that has brought down an entire institution, that has U.S. federal agents intercepting and reading private email, that has an elderly couple in the U.S. terrorized after a raid at gunpoint to seize their life’s work from a backyard greenhouse: Phragmipedium Kovachii.

This huge slipper orchid was discovered in May 2002 by an American named Mike Kovach, who found it on sale at a roadside stand in a remote corner of Peru. It was the most important orchid discovery in 100 years, but in order to make it official, a complete description had to be written up by a taxonomist who is authorized to name new plants, and the results published.

Mr. Kovach, eager to see his name preserved for posterity, took a specimen back to the U.S. and presented it to Selby Botanical Gardens (who has five such experts on staff) for identification. Selby’s, eager for the prestige associated with naming this new plant, overlooked the fact that there was no way it could have arrived there legally; Phrags. are a protected species and in order to get the proper permits to export them, CITES regulations require documentation that it wasn’t collected from the wild, including the name of the plant. A bizarre catch-22 situation.

A disgruntled ex-employee of Selby’s, Eric Christenson, who is also a respected taxonomist, was also aware of the plant. He had been shown pictures and was working with contacts in Peru to describe it, and publish his results. He planned to call it “Phrag. Peruvianum”. Selby’s, figuring that the race was on, rushed to publish their results and beat Christenson to it by a matter of weeks.

Christenson was bent on revenge, and called the wrath of the Federal Fish & Wildlife service down on Selby’s. Raids, fines, serious jail time seem to be imminent for the board. To add to their misery, Selby supporters who are counted on for big donations are holding on to their cheques in protest of Selby’s unsportmanlike behaviour. Oops.

Enter George (“the Old Wrangler”) Norris, who’s home and greenhouse was raided and ransacked by the Fish & Wildlife service in October. The Fish & Wildlife Service had obtained a search warrant on the basis of a personal email they had intercepted two years earlier, in which a crackpot offered to smuggle in some plants for George. The warrant conveniently omitted George’s reply telling him not to bother, he wasn’t interested.

Perhaps the most alarming element of this drama is the evidence that George’s private email was intercepted and used against him. Apparently, if you send or receive an email with the words “phragmipedium” and “Peru” in it, your message will end up in the hands of some sinister secret agent whose job it is to sit in a dark room and violate your privacy.

The story continues. Smelling a rat, fellow orchid growers did some sleuthing, and they turned up an interesting email message of their own.

In late July this year, George forwarded an Orchid Society newsletter entitled “SOS UPDATE, NEWSLETTER, GOSSIP SHEET AND EARLY TICKLER” to Eric Christenson as a friendly gesture. Unfortunately, among its news, gossip, and offerings the newsletter also contained an innocent (or naive) remark by George that “it is also possible that we may have some very legal Phrag Kovachii (complete with good CITES documents) after the first of the year.”

Christenson, determined to “grind this axe right down to its handle”, forwarded the message to Marie Holt, a Fish & Wildlife service agent, with the note,

“I just thought that you should know that the rumors are starting that legal plants of this species are a possibility.

I hope that the Federal Grand Jury looking into the role of the Marie Selby Botanical Gardens in the smuggling of this CITES Appendix I plant goes well.”

In mid-October, George’s greenhouse was raided.

Ha! The plot thickens. This will eventually make a great book, but I have a feeling there will be more twists and turns before this story is over.