I admit utter and devastating defeat in my first challenge to Mother Nature. I won’t be planting anything outdoors this weekend after all. 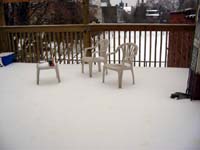 We had a very bad winter storm last night — though it’s spring. Hello!! Has anyone thought to tell Mother Nature that it’s Spring now, she can stop making us all miserable???!!!!  There are a couple of inches of snow on the ground, but mostly, it’s the ice. Everything is coated with it. It’s blowing and extremely cold. My car is stuck sideways on the road, where I abandoned it while trying to pull into the back laneway. Everyone is so crabby that, after watching my efforts to free to free my car without offering any assistance whatsoever, someone actually honked at me when I finally walked away from it. What does this have to do with gardening?? Nada. Nothing. Zip. That’s the problem. No gardening (outdoors, that is) this week. Another ice storm is on the way.
Ahh, but the SOOS Orchid Show was a bright spot in my day. People stayed away in droves (including Mom) because of the weather and the SARS scare, so the show was pleasantly free of any crowds. The displays were inspiring. After much puzzling over the difference between an exhibitor’s Phragmipedium Don Wimber and the one I have at home, I realized that mine isn’t a Don Wimber. It’s a Phrag. Eric Young. It dawned on me with dismay that I had been sold a mislabelled orchid!!! So of course I decided right then and there that I just had to have a Don Wimber. I searched all the vendor booths, but there were none to be found, which of course made it that much more desirable. I did come home with a Phrag. Sargentianum x (Phrag. Besseae x Grande), as well as an Epidendrum Parkinsonianum.
Earlier in the week, I had arranged to meet Cathy the Worm Lady in the hotel lobby where the show was taking place to pick up my order of 1lb of red wiggler worms for my compost bin. When I found her she was speaking to a show volunteer, and she looked very relieved to see me. Her first words were, "nobody knows you here!!". Well, no, but I like it that way. Otherwise, as a (new) member of the Orchid Society, I would have been roped in to actually doing something besides wander around and buy orchids. She told me that she’d been asking around for me, and everyone wanted to know what was in the box. I suppose they thought it was a very special orchid of some kind.  We had a good laugh when she described their reactions ("ewwwww!!!!") upon hearing that the box contained a pound of worms. People gave me a very wide berth when I walked through the hotel with my package to get to my car.

Back home, the worms were given a ceremonial welcome as I dumped them into the compost bin, cheered on by Marian, Laird, and Jake the dog. Laird recoiled in disgust, wondering aloud how someone (me) who doesn’t like bugs could be so enamoured of worms. I was too proud to show my instant revulsion when I cut open the package and scraped the slimy little things off the newspaper and into the box. Once they were safely in there, they became much more interesting as I watched them quickly wiggle their way down out of harm’s way from the light. They seemed happy with their new surroundings.
I checked the tags on my phrag, and I do indeed have a Phrag. Eric Young, correctly labelled. I have no idea why, for the last year and through two bloom cycles, I have been under the delusion that it was a Don Wimber. Way to go, girl.
Gotta go, the tow truck has finally arrived!